Find this article at:
go.ncsu.edu/readext?717882
— Written By Joanna Radford and last updated by Nicole Vernon

Large wasps have been reported buzzing around lawns. These solitary wasps are called cicada killer wasps. While they are loners, they are often active in the same area. These wasps are considered beneficial since they feed on cicadas that feed on young trees. Their appearance can be startling. As an adult, they are about 1 1/8 – 2 inches long. The females are larger than the males. They rank as one of the largest wasp species in North America. Adults have rust-colored heads, thorax, and wings with orange legs and a black and yellow striped abdomen. They took much like yellowjackets. Not only do they look intimidating, they sound scary. They make a loud buzzing noise, especially around burrows. They like to intimidate predators and humans! The male wasps will defend their burrows. They will dive-bomb anything they think is a threat, but they will not sting. The female wasps can sting and will do so when mishandled. 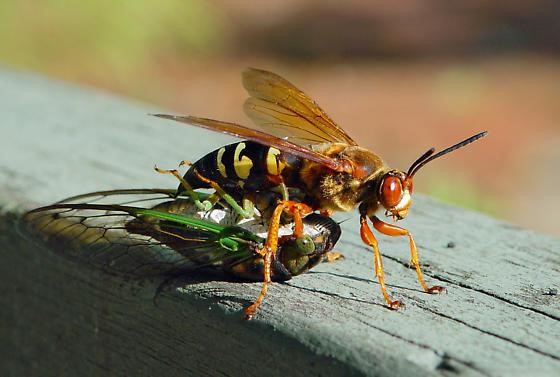 Cicada killer wasps do not feed on plants, but they do feed on the nectar from flowers. This means they help with pollination. The females will also dig holes in the ground. These holes are burrows that can extend four feet into the soil. The females lay their eggs at the end of each burrow. Homeowners may find these holes with smalls mounds of soil beside of throughout their lawn in mid to late the female flies off to hunt cicadas. The female wasps will sting the cicadas. This will paralyze the cicada so the wasps can take it back to the burrow. This will serve as food for her egg once it hatches. The cicada killer wasp larvae can feed off the cicada for up to two weeks. The larvae will then spin a silk cocoon for overwintering.

Since cicada killer wasps are considered beneficial insects, it is usually not necessary to physically or chemically control cicada killer wasps unless their presence is a nuisance. There are a few things homeowners can do to help deter the wasps from lawns. Wasps do not like wet soil so homeowners can drench an area with water and the wasps may abandon the site. Lime and fertilizer applications can encourage turf growth and may eliminate a cicada killer infestation because females traditionally look for bare soil surfaces to dig their burrows.

If homeowners have an infestation of cicada killer wasps and all control options have been exhausted, applying a pesticide may be used as a last resort. As with any pesticide product, timing and placement is critical for its effectiveness. Applying insecticidal dust (carbaryl) to the entrance of each nest, will result in some control of cicada killer wasps, provided the burrow opening is not closed. Disturbing the burrow will cause the wasp to abandon the burrow and start excavating a new tunnel, eliminating the possibility of it encountering the insecticide. Use caution when applying insecticides. Always follow the label. Keep in mind any insecticide that kills harmful and destructive insects also kills beneficial insects.