Find this article at:
go.ncsu.edu/readext?717215
— Written By Joanna Radford and last updated by Nicole Vernon

The Asian long-horned beetle (ALB) was discovered first in New York in 1996. Since this time, this destructive wood-boring pest has been attacking trees in the United States. The tunneling done by the beetle larvae girdles the stems and branches of these trees. Repeated attacks from the beetle lead to dieback of the tree crown and eventually, death of the tree. The pest is believed to have traveled from Asia inside wood packaging material. It is now found in five states.

The adult beetles are large, distinctive-looking insects measuring 1 to 1.5 inches in length with long antennae. Their bodies are black with small white spots, and their antennae are banded in black and white. Adult beetles are usually seen from July to October, but can be found later in the fall if temperatures are warm. Adults usually stay on the trees from which short distances to a new host to feed and reproduce. Each female usually lays 35-90 eggs during her lifetime. Some can lay more than that. The eggs hatch in 10-15 days. The larvae feed under the bark in the living tissue of the tree and then bore deep into the wood where they pupate. The adults emerge from pupation sites by boring a tunnel in the wood and creating a round exit hole in the tree. The ALB has one generation per year. 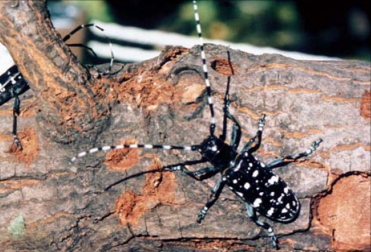 The adult Asian long-horned beetles are large, distinctive-looking insects measuring 1 to 1.5 inches in length with long antennae. Their bodies are black with small white spots, and their antennae are banded in black and white.

A complete list of host trees in the United States has not been determined. However, known trees the beetle prefers include maple spices (Acer spp.) including boxelder, Norway, red, silver and sugar maples. Other preferred hosts are birches, elms, willows, and horse chestnut. Rare tree hosts include ashes, European mountain ash, London planetree, mimosa, and poplars. 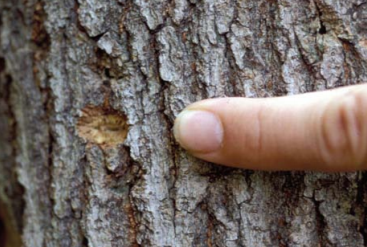 Oval to round pits in the bark. These egg-laying sites or niches are chewed out by the female beetle, and a single egg is deposited in each niche. 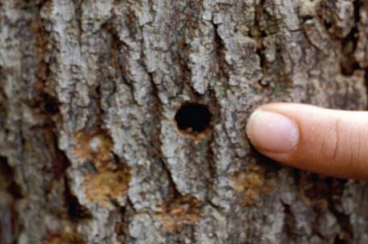 Round holes, 3/8 inch in diameter or larger, on the trunk and on branches. These exit holes are made by adult beetles as they emerge from the tree.

Currently, the only effective means to eliminate ALB is to remove infested trees and destroy them by chipping or burning. To prevent further spread of the insect, quarantines are established to avoid transporting the pest. Check trees regularly for this insect and look for the damage it causes. The United States Department of Agriculture requests that any sightings of the insect be reported. These reports can be made at “Report It.”

For more information about the Asian long-horned beetle in the United States, visit the U.S. Forest Service website.