Find this article at:
go.ncsu.edu/readext?702378
— Written By Joanna Radford and last updated by Nicole Vernon

Mushrooms come in many different shapes, sizes, and colors. While some are tasty on Italian dishes, there are some found in nature that are poisonous when consumed. Never eat an unknown mushroom unless you are confident of your identification skills. Mushrooms are a point of interest to nature lovers. The mushroom seen above ground is the fruiting body of the fungi that lives in the soil. Most of the fungal mass is below ground, and many times goes unnoticed until the mushroom emerges. Mushrooms are decomposers. They break down dead and decaying organic matter such as leaves, old root and stumps. Although many of them are unsightly, they do not damage lawns or gardens.

Over the past several weeks, our weather has been conducive to the growth of mushrooms. They thrive in prolonged periods of wet, humid weather. This type of environment causes fungi to send up fruiting structures. Fungi disperse to new areas via windblown spores. When the spores land in a suitable location they develop into new fungi which will grow mushrooms given enough time.

Once the weather dries out, the mushrooms will do away on their own. Although they can not be seen above ground, the fungal mycelia are still growing in the soil. The fungus will continue to grow and persist as long as there is plenty of organic matter to feed upon. Mushrooms will emerge again as soon as the growing conditions are right. If you are unwilling to wait for mushrooms to go away on their own, you can remove them by hand or with the lawn mower. Although removing the mushrooms themselves does nothing to affect the fungi in the soil, it will reduce the number of spores released into the environment and the number of new mushrooms in different areas of the lawn and garden. Fungicides are generally not recommended because they are largely ineffective, and mushrooms are not damaging.

Here are a few common mushrooms seen in the lawn. They do not cause real damage but can be unsightly, foul-smelling, a concern for children and pets, or a curiosity.

Fairy Rings – cause circular or semicircular green bands of grass in a lawn. Rings can be 1 to 12 or more feet in diameter, and mushrooms might or might not be present. All grasses are susceptible to fairy rings, and several species of mushroom-producing fungi can be involved. Fairy rings often continue to enlarge for many years, and as the ring expands, the older portions of the fungus in the center die. 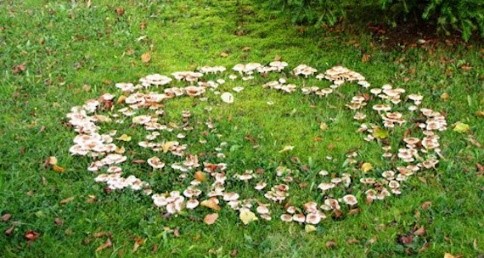 Puffballs – The fruiting body is an enclosed ball that opens, or ruptures, to release thousands of spores when mature. They are usually about one inch in size and are creamy white when young. At maturity, they have dark-colored spores on the inside. 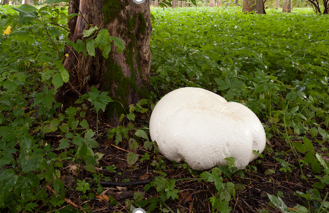 Stinkhorns – Looks like a giant finger sticking up through the lawn. The tip of the stalk is covered by spores in a gooey slime that stinks. The terrible odor attracts flies and other insects, which pick up and spread the spores.

Lawnmower’s Mushroom – Grows alone or with multiple mushrooms. A little brown mushroom than loses color as it loses water. It has a bell shape.

Slime Molds – Not a true fungus but grows in similar environments. They sometimes occur in lawns but more common are found on mulch in landscaped areas. They form a gooey mass that looks like vomit on the lawn surface. This substance can be various colors, but the common species, produces a yellow plasmodium that slowly moves across the lawn, especially at night. The mold eventually dries on the lawn surface and produces dusty masses of spores. Undisturbed slime molds usually disappear in a week or so, but damage to the lawn underneath might result from shading and suffocation. 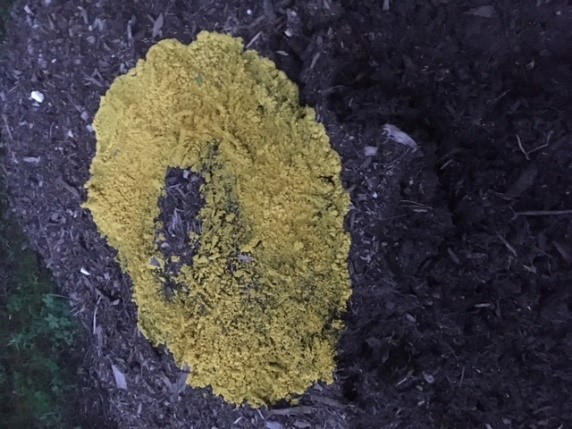 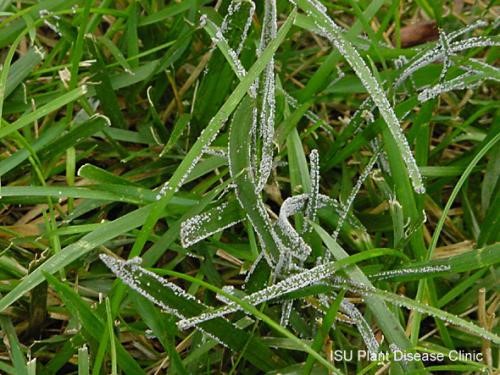