Find this article at:
go.ncsu.edu/readext?700875
— Written By Joanna Radford and last updated by Nicole Vernon

Many of us are busy working on our lawns. You may have noticed that we are not the only ones. Moles and voles are beginning to be more active and with this activity we will begin to see raised tunnels or mole hills throughout some lawns. It is helpful to know which pesky critter created these tunnels if we want effective controls. Moles are omnivores and like to eat grubs. Pine voles are herbivores and like to eat the roots of plants.

For moles, management is difficult. Methods for control and damage prevention are exclusion and cultural methods such as packing the soil, frightening, repellents, toxicants, fumigants, and trapping. Exclusion control is easier in small areas like seed beds. Other effective options include packing the soil or reducing the soil moisture (this helps reduce the habitat’s attractiveness) and reducing their food supply by killing grubs with insecticides. There are various products on the market that are effective. The time of application is extremely important. We generally recommend applications in April and May or August and September. This is because the grub is close enough to the ground surface that an insecticide can penetrate through the soil to the grub. Most soil applied insecticides required the product to be watered in with a garden hose or by rainfall. 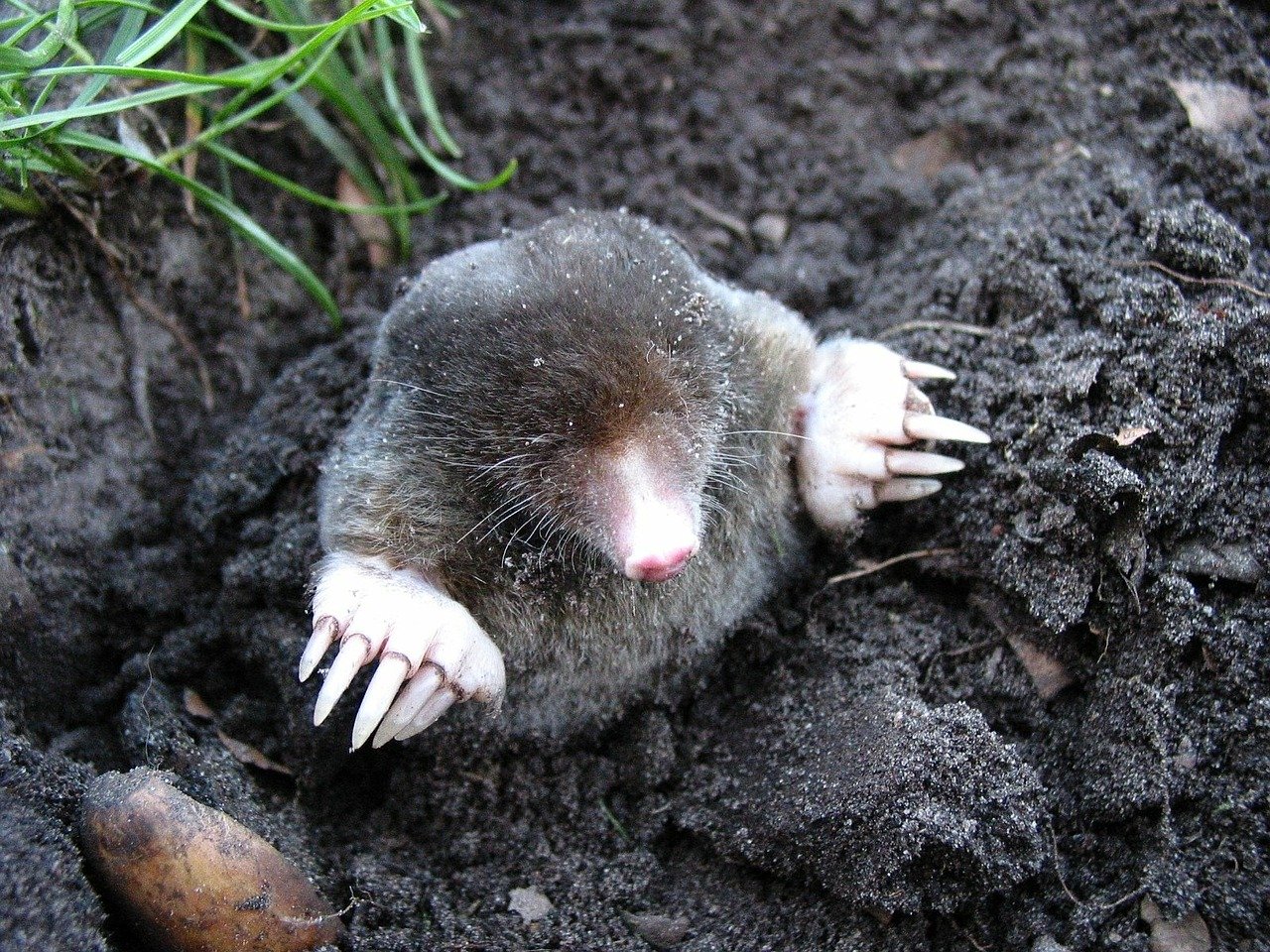 Moles may also be trapped. There are several mole traps on the market and if properly handled, will give good results. It can be somewhat tricky to catch the mole. Traps should be placed in active tunnels to be effective. There is also a so-called mole plant or caper spurge (Euphorbia latharis). This plant is advertised to act as a mole repellent when placed throughout flowerbeds. There is no known research that supports this claim. The use of caster beans, which are poisonous to humans, and electromagnetic devices are also unproven methods of mole control. It appears there are no short cuts or magic wands when controlling moles.

Surprisingly, at one time, moles were on the protected species list and could not be killed. The ban has been released and it is now legal to kill moles. There are bait products on the market for mole control. The bait looks much like a worm/grub. It is placed in an active mole tunnel, the mole eats it and that is the end of that mole. Read the complete label for correct usage of this product.

On the other hand, voles prefer areas of thick vegetation or areas that are heavily mulched. They chew on the roots and trunks below the soil line. In order to determine if voles are a problem, pull the dirt or mulch away from the trunk and look for areas where the bark has been stripped away. Heavily damaged plants will look very weak and may eventually die.

It is best to keep the ground bare around plants they like to feed on. Maintaining bare ground can be achieved by mowing very closely, removing mulch or applying an herbicide to kill off undesirable plants. Bare ground gives potential predators the opportunity to help control vole populations.

There are few poisons or baits available for homeowners to use on the pine vole. Few are moderately successful. It is best to try to control voles before spring since their food supply may be limited at that time. Valued plants can be planted in raised beds with a screen bottom. Some plants such as hosta (a vole delicacy) can be potted into plastic pots and the entire pot can then be planted. But, the controls are limited. 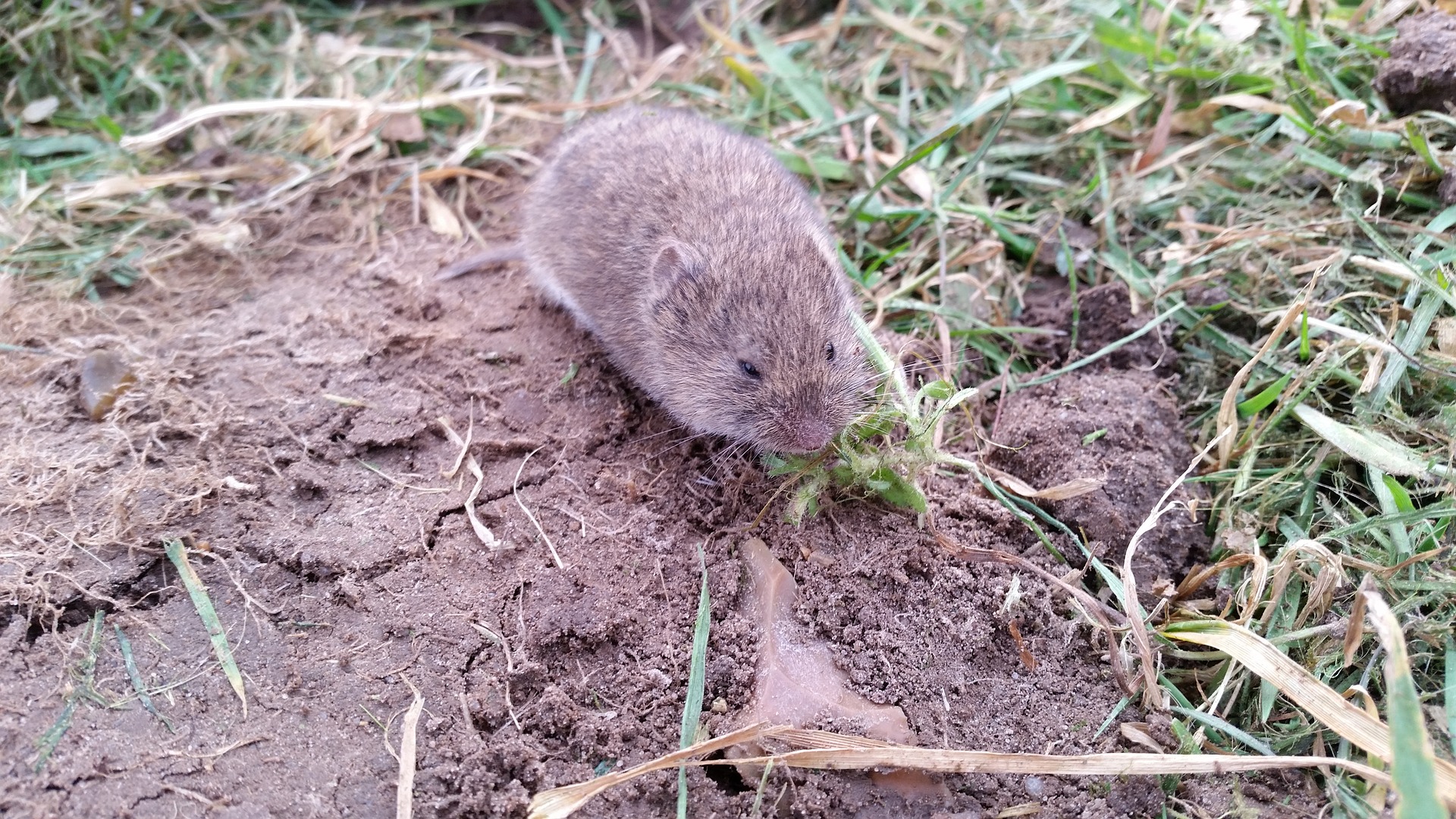