Find this article at:
go.ncsu.edu/readext?698942
— Written By Joanna Radford and last updated by Nicole Vernon

The gypsy moth caterpillars are serious pests of forest and shade trees, as well as a nuisance to people. Each female lays one mass of several hundred eggs. Egg masses are attached to trees, buildings, campers, trailers, yard furniture, or anything that is within crawling distance. Eggs survive the rest of the summer, fall, and winter. Usually eggs hatch in May in our area. The very young caterpillars do not eat a lot but the bigger they are, the more they eat and the more damage they will cause. After feeding for  a few weeks, caterpillars pupate, and then later moths emerge from the pupae and fly in July and September. 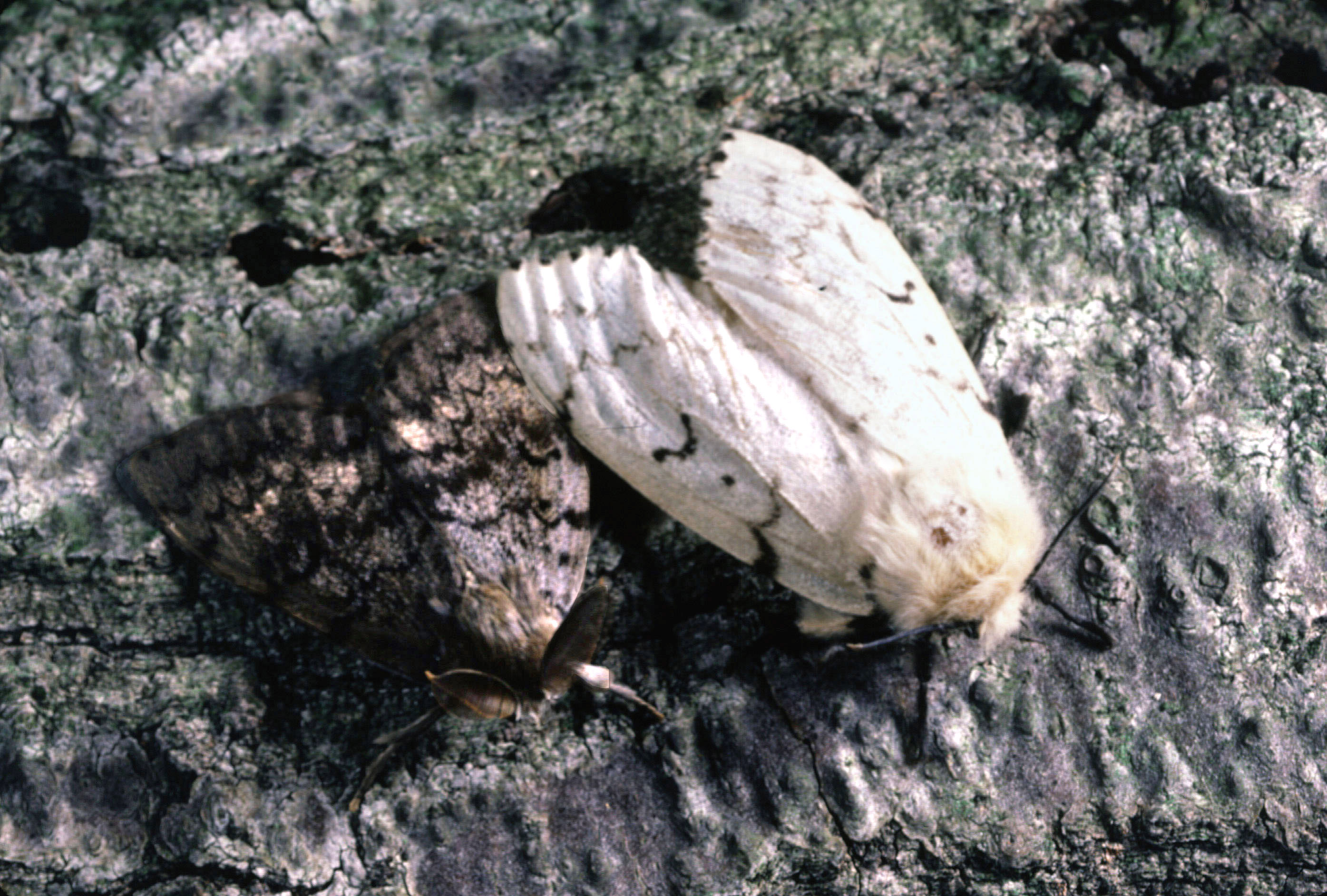 The gypsy moth is a pest and can cause great damage on some of the trees we have here in Surry. They like alder, apple, aspen, basswood, birch, boxelder, mountain ash, all types of oaks, and sweet gum the best. Older gypsy moths also feed on beech, blueberry, chestnut, hemlock, locust, maple, pine, and spruce. Repeated defoliations can seriously weaken and eventually kill some trees. Gypsy moth caterpillars can also pose public health concerns for people with respiratory problems, as their hairs and droppings may cause severe allergic reactions.

So, in order to protect our trees from the gypsy moth, the North Carolina Department of Agriculture and Consumer Services (NCDA&CS) has been monitoring the pest population for the past several years. They use gypsy moth traps to identify potential problem areas. Surry County, along with other counties, has been identified and monitored over the past several years. NCDA&CS has determined that there is a need for control measures in Surry County.

North Carolina Department of Agriculture & Consumer Services is scheduled to spray for the Gypsy Moth in Westfield and Pilot Mountain areas of June 4th and/or June 5th this week, weather permitting. If you are in one of these areas, you may see an aircraft flying over the tops of the tree line. The aircraft will be dispersing SPLAT Gypsy Moth-Organic, infused with the naturally occurring gypsy moth pheromone. This pheromone is specific to the gypsy moth and is designed to disrupt the gypsy moth’s life cycle. More specifically, its mating cycle. The presence of the pheromone makes male gypsy moths unable to follow the natural pheromone scent trails released by the females, decreasing mating success and reducing the gypsy moth population. It is a cruel trick to play on the male gypsy moths, but it is extremely effective in decreasing new offspring. The pheromone is not harmful to humans, animals, or plants and it will not affect other insect species.

The SPLAT Gypsy Moth-Organic is made entirely of food grade materials and has the consistency of hand cream. It will not harm the paint of your car. If you notice its droplets on your car, wash it with a mild detergent and water like you would with road grime. Same goes for your clothes. If it comes in contact with your clothes, wash in warm water and detergent. It also will not harm your lawn and will immediately start biodegradation into the soil.

More information on gypsy moths can be found at:

Gypsy moth caterpillars are serious pests of forest and shade trees, as well as a nuisance to people. This hairy caterpillar has characteristic pairs of blue dots followed by pairs …